I have been making knives recently. Last night I finally completed the karambit I have been working on for over a month. 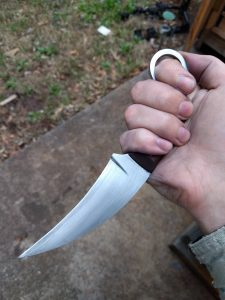 The karambit originates somewhere in Southeast Asia and has been found in Malaysia, Indonesia, Sumatra, and many other places. People think that it started as a farming implement before becoming a knife that reminded people of their neighborhood tigers. In other words, it’s a farmer’s tool that became a claw. I like that it originates as a knife used by the working class rather than the elite (that would be the kris).

I love this knife because

Like all of my knives so far, this one started out as a bar of 1095 steel. 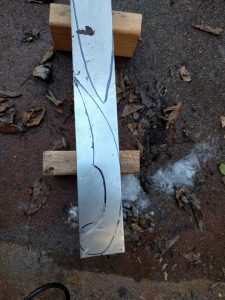 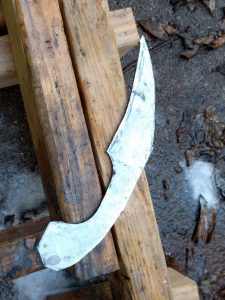 Then I cut and ground it until it was the right shape. I used a jigsaw with a metal cutting blade and then a 3×21″ belt sander with a variety of belts. 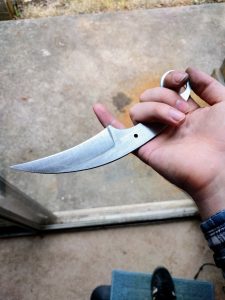 I hardened it in a pile of bricks with a propane and map torch. I tempered in the oven. 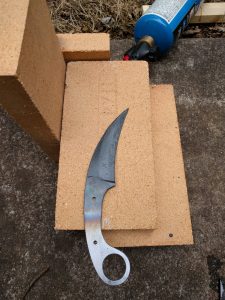 Then I sanded the knife until it was shiny. I cut some handle blanks out of a chunk of walnut and then masked off the blade and ring. 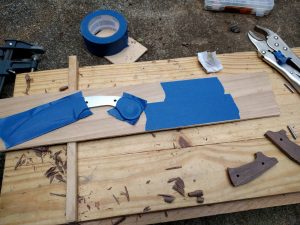 I used 5-minute epoxy to glue the handle to the knife. The pins are just nails cut to length with a hacksaw. 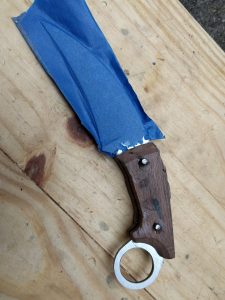 Finally I sanded down the pins and handle and sharpened the knife. A little bit of oil and it is ready to go. 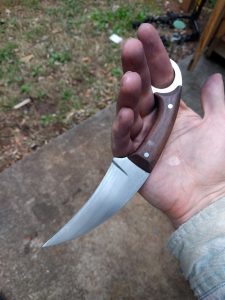 I think I’ll sell this one if I can find someone interested in handmade knives. Unfortunately, I started making it before the game with Joel so I won’t be able to count it towards beating him. But I have other knives in the pipeline for that.