I wanted to build a left-handed gaming keyboard, mostly to see if I could. Here’s what it looks like: 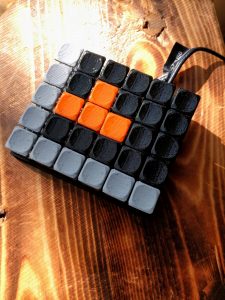 There actually are already one-handed gaming keyboards on the market. They range from the $130 setups from reputable brands to $25 no-name Chinese gadgets.

It was important to me to:

A review of the field

Mechanical keyboards are shockingly expensive. It is normal for people to pay $175 for solder-it-yourself kits.

The most economical pre-designed solution would be to purchase a let’s split pcb and build just one half. Unfortunately this design doesn’t have a dedicated number row. That’s really helpful for many games and I didn’t want to go without.

I soon realized that the best option for me would be to design my keyboard from scratch and just wire it by hand.

I used an Arduino Pro Micro to read the switches and send keypresses to the computer. This controller uses the Atmega32u4 chip which can pretend to be a usb keyboard. A quick google image search showed me what chip pins corresponded to the Pro Micro’s pinout. 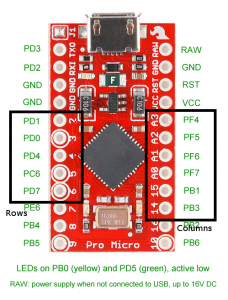 I knew I wanted a mechanical keyboard so I ordered the cheapest mechanical switches I could find. I ended up with 30 Gateron Brown switches from aliexpress. These are perfect for a gaming keyboard because they require a fairly light actuation force.

I decided on a straight layout of 6X5 switches. I used calipers to measure the switch dimensions and then created the case model in OpenSCAD. I built the spacing with 3mm margins. This allowed the whole thing to fit on the bed of my little 3D printer. 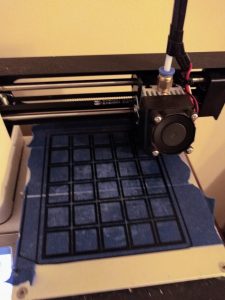 Once the case finished printing I snapped in all 30 switches and flipped it over. 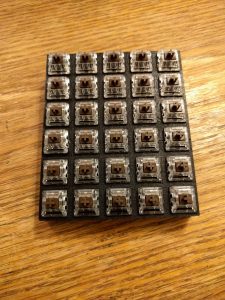 The way a keyboard like this works is that a microcontroller reads a matrix of switches and figures out which one is pressed by sensing the current going from a row to a column.

To make sure that the microcontroller doesn’t get tricked by adjacent keys I added a diode to each key in each row.

This was honestly the fun part. Once I had all my components laid out I started soldering diodes to the left pin on each switch. I connected each row together with the tails of the diodes.

To connect the columns I laid a wire down and marked the areas where it would intersect with the switch pins. Then I stripped the wire at each of those locations and soldered it to the switches.

When that was finished I checked my firmware layout and soldered the columns and rows to the appropriate pins. 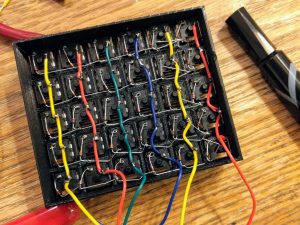 The firmware I used was QMK. But I didn’t need to program it myself; I used two websites to figure it out for me.

I printed 30 keycaps in three different colors and trimmed them to fit. 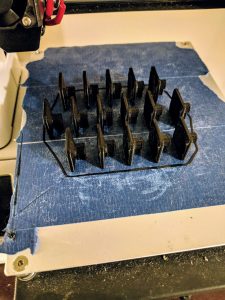 Then I put it all together and connected it to my computer. 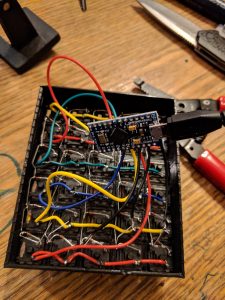 One funny thing is that I forgot a hole for the USB cable. But it was super easy to use the soldering iron to melt a slot in the side. 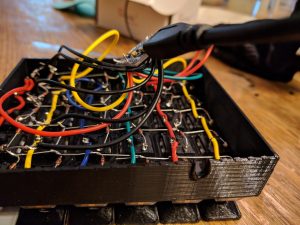 Success! It worked on the first try. I pushed buttons and saw characters show up on my screen.

I did need to do a few firmware revisions before getting it to act exactly as I wanted. Now there is a base later that is a normal left hand of a keyboard. Then there is a numpad layer that also has volume and media keys.

So I now have a gaming keyboard that can also act as a numpad. It’s a joy to use since it works well and everything I type on it I think I made this.

Here are some links to components and resources I used to build this:

I may make another of these to complete the full keyboard. Or I may just leave it as a numpad. What do you think? What keys would you map if you had a custom keyboard? Let me know if you build one of these. I’d love to see it.